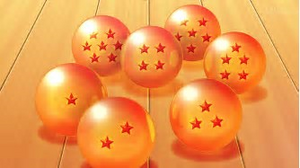 Narakian Wish Orbs are a set of artifacts originally created by the Narakians. There are two existing sets, each composed of seven orbs. The original set is found on Planet Narak, but it is also known that there are Kedan Wish Orbs located on the planet of Keda. When all seven Wish Orbs are collected and placed together, they begin to glow, causing the dragon that sleeps within them to appear from a beam of light. The dragon will ask the gatherer of the orbs to state their wish, and telling the dragon will grant it. However, the dragons are not limitless in their wish granting, and they will sometimes say that a wish is beyond their power if it cannot be granted. Once the Wish Orbs have been used, they shoot into the air and scatter across the planet. Narakian Wish Orbs are the notably superior pair, allowing for as many as three wishes to be granted, the Kedan set only granting one. They are also greater in size, being a few feet in circumference, while a Kedan Wish Orb fits into the average Kedean's palm.

Retrieved from "https://universezeta.fandom.com/wiki/Narakian_Wish_Orbs?oldid=237"
Community content is available under CC-BY-SA unless otherwise noted.